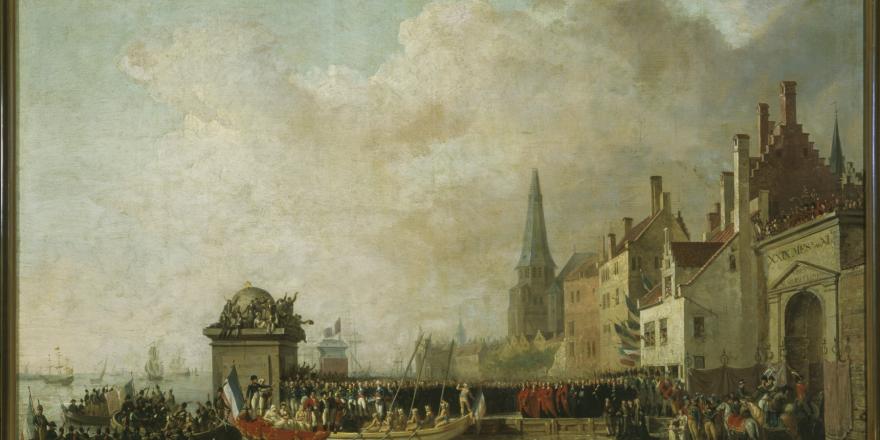 Painting by Van Bree on the list of Top Pieces

On 15 June 2020, the Flemish Government added the painting 'Entry of Bonaparte, as First Consul, into Antwerp on 18th July 1803' by Mathieu Ignatius Van Bree to the list of Top Pieces. The painting gives an equally spectacular and detailed impression of the entry of the French sovereign into Antwerp in 1803. It marks a momentous occasion in the history of Antwerp and Flanders. That is why it has special value.

From a documentary piece to masterpiece

The French emperor's visit to Antwerp was an important moment for both the city on the Scheldt and Bonaparte himself. Napoleon had great plans for Antwerp. He wanted to build a modern port that would serve a leading role within the French empire, both in terms of merchant shipping and for a formidable naval force.

For this festive event, the Antwerp painter Mattheus Ignatius van Bree (1773-1839) was commissioned by the city council to design several floats, in addition to statues and triumphal arches that decorated the Town Hall. In 1801, Van Bree had already painted two allegories glorifying Bonaparte.

During this visit, Bonaparte's wife Joséphine de Beauharnais was so charmed by Van Bree's works and verbally ordered a painting to immortalise this event. The official order was only placed in 1807 by Dominique Vivant Denon, the then director of the Musée Napoléon. Van Bree received 9,000 francs for this commission.

Mattheus Ignatius van Bree was extremely meticulous in the preparation of the canvas: he first created portraits of more than a hundred people he wished to depict in the painting, including the regional administrators of the department, the Antwerp city council and a number of high-ranking French officers. He also drew the likenesses of commercially successful individuals in Antwerp, such as the German merchant Georg Kreglinger. All these drawings are now kept in the Cabinet des Desseins of the Louvre Museum.

Van Bree then painted two identical works, but each in a different format. The small format (77 x 126 cm) belongs to the MAS collection (inventory number AS.1959.097). The large oil painting hangs in the Palace of Versailles. 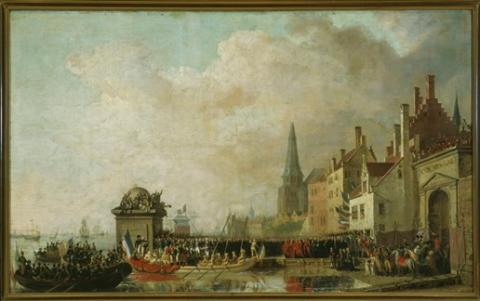