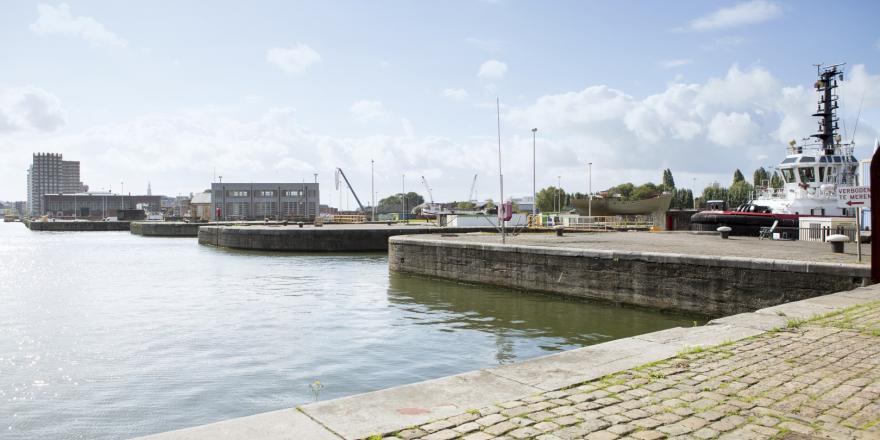 The story of the site

Over a period of 150 years, ships came here for repairs and maintenance in a dry dock and left again. This beehive of activity was initially dominated by the mighty sailing vessels and ocean steamliners of the Red Start Line. But over the course of time, tugboats, dredgers, naval vessels, grain elevators, school tjalks, floating cranes, etc. passed through here. Until early 2018, the Port Authority was operating here. Now it is home to the MAS' collection of vessels. The site is being transformed into a hotspot to experience the city's maritime heritage.

The Dry Docks site: a place with a rich past

Long before the 19th century, Antwerp, as an important port city, maintained sites on the banks of the Scheldt where ship craftsmen plied their trades. But a modern port requires modern infrastructure.

Halfway through the 1800s, the port of Antwerp broke through the city walls. What until then was marshy land beyond the ramparts, was transformed into the Kattendijk dock. The first dry dock was completed in 1863 on the west quay of the new dock. A few years later, sea-going vessels could already berth there in three 'locks'. Keeping pace with the port, the dock also expands: around 1880, it is extended. Three new dry docks were connected to the pump house, which pumped out the water. A seventh dry dock was completed in 1920. By 1931, the number had risen to ten.

The concept remained the same, even while the construction methods evolved. The first dry docks were built using elegant brickwork. The most recent docks are made of robust concrete.

The oldest pump house was initially flanked by a large boiler room for the steam-driven pumps. It utilised the tides in the Scheldt to manage the water in the dry docks. The pump house in Art Deco style for the more modern dry docks runs three electric pumps.

Over the years, smaller detached workhouses have also sprung up on site. Various ship repair companies use them: Béliard-Crighton, The Antwerp Engineering Co …

The site took on its present form in the 1960s. The new workshops housed a boiler maker, a sail-making facility, a joinery, a propeller work hall, a forge, a fitting workshop ...

Dry dock. Docks that are dry?

A ship requires maintenance, also below its waterline. That work on the 'underwater hull' can be done when a ship is beached at low tide. The ship can also be pulled onto dry land, or berth in a dry dock. This is a dock that can be pumped out according to the size of the ship.

Digging a dry dock is an industrial undertaking. Before 1800, it was hardly ever done. Belgian engineers travelled to the United Kingdom to learn how it was done. Cities such as Belfast, Southampton and London already had a well-established tradition in ship repair.

At the Antwerp dry docks, there is a pump house next to the docks, which is connected underground so that the docks can be pumped dry. Once the dock is dry and the ship is supported by keel blocks and struts, rivets, welding equipment, paint brushes and all other required tools can be brought in. The objective is to quickly get the ship seaworthy again. 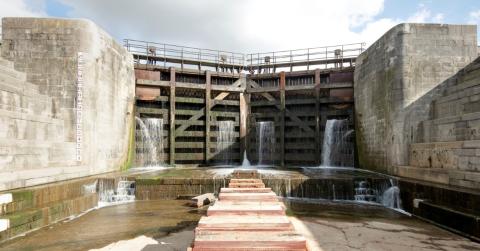 Where has Dock 7 gone?

The city dry docks are numbered from one to ten, from south to north. But these days if you walk from the Kattendijk dock to the Port House, you will only find nine. Dry dock 7, once the largest city dry dock, no longer exists.

The preparatory work for Dry dock 7 began in 1910, but the first sea-going vessels were only able to dock there in 1920. The reason for the delay: a flooded construction pit, the First World War and several smaller setbacks.

Dry dock 7 was 225 m long and 29 m wide. Because of these dimensions, it was planned differently than the dry docks to the north-east of the current Port House. Thus, even the largest ships – such as the infamous Belgenland of the Red Star Line – could easily be manoeuvred into it.

At the beginning of the 1980s, the number of sea-going vessels using Dry Dock 7 dropped. It was decommissioned. Ten years later, it disappeared. However, it has left its trace in the widened passage from the Strasbourg dock to the America dock. The accompanying pump house still stands there but is now a restaurant.

The ship repairers of the Antwerp Port Authority moved to a modern site, further north in the port. But the work continues on the site of the old city dry docks, now with historic ships.

The MAS' collection of ships moved from the Scheldt quays to a safe facility near the dry docks, where they are loving cared for and maintained. Other partners also work there on the restoration and maintenance of their heritage ships. 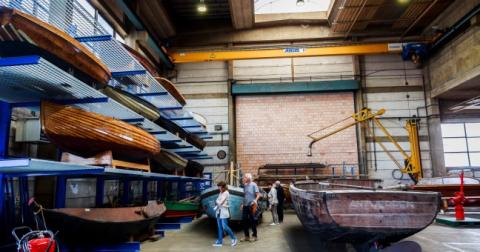 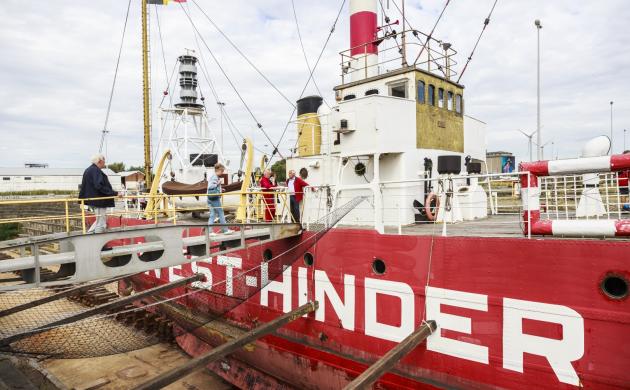 A unique collection of vessels

The MAS manages the largest collection of historical vessels in the country. For years, it was displayed under the shelters next to Het Steen, but after a spectacular relocation operation, the vessels found a new home at the Dry Docks site. 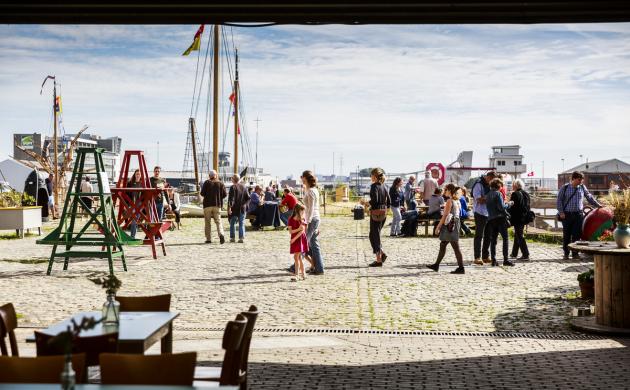 A site full of life

We breathe new life into the historic Dry Docks site. STORMKOP is now home to young and less young adventurers.