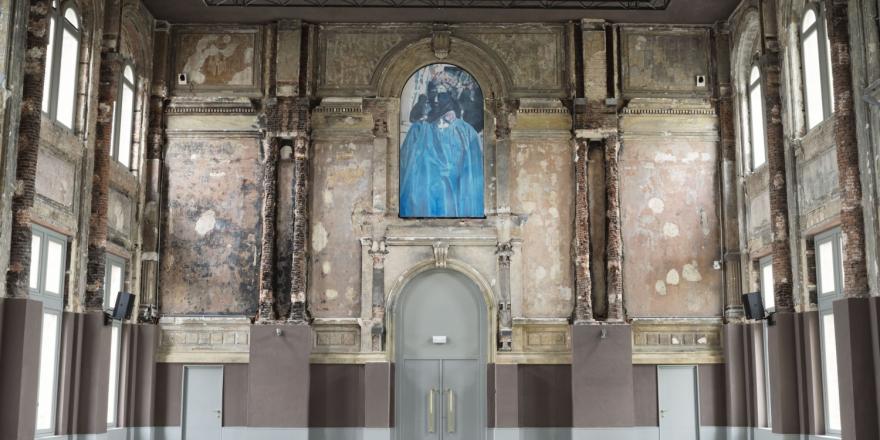 Tuymans made the work München ‘in situ’ specifically for the Royal Atheneum of Antwerp. The work hangs prominently in the recently restored reception hall, which can be visited on May 17 and 18.

The 19th-century reception hall and a large part of the front extension of the Royal Atheneum on the Franklin Rooseveltplaats were completely destroyed by fire in January 2003. The sumptuous historic wall decorations went up in flames. The only work that survived the fire was ‘Allegorie van de Faam’ by the 19th-century artist Frans Vinck from Antwerp. ‘München' by Luc Tuymans now hangs right across from this work. München is a four-metre high canvas.

Tuymans’ work shows an impressive, masked figure wrapped in a blue cloak. It refers to an image that was derived from the carnival parade in front of the Haus der Kunst in München in 1933, at the start of the Third Reich. “The work also contains an element of menace; you feel that something is going on but you don’t know exactly what it is.” That’s what Tuymans says about it. For him the work is about identity formation, crucial for students that go to secondary school in a city that is confronted with so much diversity. It translates today’s insecurities in a modern Allegory of Doubt.

Tuymans created the work for the Royal Atheneum of Antwerp, where it will be on permanent display. ‘München’ is included in the City of Antwerp’s collection and is managed by the MAS, which is responsible for caring for the work of art. It is the second monumental work by Tuymans in the municipal collections; the other work is ‘Dead Skull’ on the square in front of the MAS.

The book München. Luc Tuymans in het Koninklijk Atheneum van Antwerpen includes an extensive double interview with the school’s headmaster Karin Heremans and the artist Luc Tuymans by art historian Jan de Zutter. It also contains a historic portrait of the Virgin from Antwerp by Letterenhuis historian Jan Lampo and a contribution by architect Rutger Steenmeijer about the restoration of the building and the reception hall.