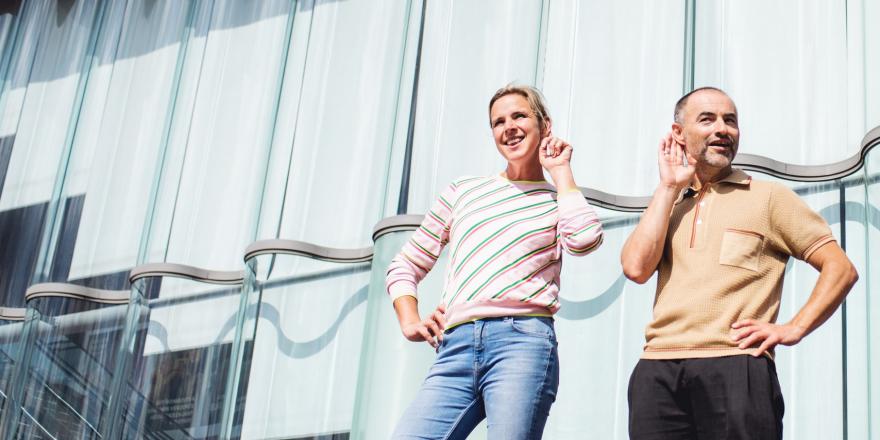 Theatre producer, writer and actor Dimitri Leue graduated from the Antwerp Conservatoire where he studied under Dora van der Groen, Peter Van den Eede, Frank Focketyn and others. Thanks to Oda Vaneygen and Barbara Wyckmans, he grew into an established name in the theatre world where he mainly focuses on plays for children and youth.

Dimitri interprets social themes in a creative way. For the last 20 years or more, words and music have been his outlet.

Together with the MAS, Dimitri gathered stories from the collection and the city for the new exhibition 'Listen'. Inspired by this wealth of stories, Dimitri produced a compelling audio play for the exhibition, a book and a theatre performance. He brings the stories to life with his main character Kameleonie, interpreted in the play by Tine Embrechts. She can't wait to take you on a journey with her.

A brief chat about their collaboration with the MAS.

Writing stories for an exhibition: did you enjoy that assignment?
The fact that the MAS classifies stories as heritage is something I personally find incredible as a storyteller. I find it truly moving to give something immaterial a place in a museum. Of course, this is then linked to objects from the MAS' astounding collection, but in essence, the 'Listen' exhibition is about words. Let's just say that this assignment was the most unexpected of my life. So I would like to sing the praises of curator Liene and her team.

Was it very different than what you are used to?
Definitely. Normally I start out with a single idea. Now I started with a hundred thousand ideas, and I mean that literally. A1 sheets full of stories from all districts of Antwerp, stories from all over the world that arrived on our shores via the Scheldt, the Central Station and Deurne Airport. Stories that have had staying power here. How do you find the true gems in this mountain? I first classified the stories. Antwerp stories, world stories.  (Yes, Antwerp stories are also world stories, I realise that, but I thought non-Antwerp stories wasn't right either. After all, those worldly stories are also a bit Antwerpian). True stories, fictional stories. Stories with people in the lead role, stories with ghosts, gods, animals, and assorted characters in the leads. Stories with a happy ending, stories with a tragic ending. Weighing up all the various facets, I tried to find a nice balance between all these stories. And then add my own flavour to them.

How does such a story come about for you?
Actually, the hardest part was trying to whittle the choice down to the final twelve from the twenty selected stories. That was painful. I had already got quite attached to them. But once I found the character of Kameleonie, a girl who empathises so much with stories that she becomes the main character, I had the glue I needed to pull all the stories together. I was also reassured that the stories that didn't make the cut for the exhibition wouldn't be lost. No, we even created a space at the end of the expo where all those dozens of stories we didn't tell, would be featured. For the twelve stories that remained, I tried to add some humour and poetry with a lot of respect for the story.

What character surprised you the most?
Paul Panda Farnana and Malka Zimetbaum are two real stories. Farnana was the first black person to graduate from higher education in Belgium. An incredibly strong personality, as was Malka Zimetbaum, a Jewish woman who perished in a concentration camp. These are just two characters that we, as a society, must use to hold a mirror up to ourselves. Not only to contemplate ourselves as human beings, but also ourselves as a society. They were both treated unjustly by other people. You hope that the world is kinder now, that such racism would no longer exist. But I fear that we will have to tell these stories for a long time to come, to remind ourselves of our mistakes.

Is there a story that you will continue sharing?
There is a cute little African story in the exhibition about a turtle that wants to fly. And it succeeds. How, you may ask? Well, you'll need to visit the exhibition to find out.

It does seem to have inspired you, because a book was published and a theatre performance is forthcoming. What can people expect from that?
I always saw it as a triptych. The book emphasises the text, is supplemented with beautiful illustrations by Alain Verster and has a download code for the songs. Tine Embrechts lends her vocal talents to the exhibition, who takes you through the stories and the exhibition. You can also hear the songs here. The theatrical concert will mostly focus on the songs and wants to trigger the audience to come to the exhibition or just wants everyone to dance to music inspired by valuable heritage!

What did you think of the assignment? Was it very different than what you are used to?
I liked it a lot, but it was very intense. Especially because I also did it in English and French. That was a challenge, but that way Kameleonie stays the same character across all languages.
In itself, it was not very different from other reading assignments I do, but I did take into account that people would listen to it directly through earphones in an exhibition. So it always involves searching for the right tone for the character: who is Kameleonie, how does she talk? That is always a bit of a quest and it takes time. I especially enjoyed reading the stories, so I could really indulge myself in portraying them.

Are there any stories that you would continue to tell?
I have retold many stories from Antwerp, such as Brabo or the lovers who jump off the Cathedral together. So those are stories that do stick with me, but my favourite is still the story of the turtle that could fly. I always try to listen with the ears of my own young children and what they would like, and for me, the African story is one of the best. The most playful of all.

You also sing the songs in the exhibition and also collaborated on them. Which of the two did you enjoy the most?
I thought the music recordings were perhaps even more fun to do. We played around with voices and searched for the right music. We worked really hard on it. I am very proud of the result. I try to combine music and acting in a lot of what I do, I don't really want to choose between them. And it is so nice that both could be incorporated into this project. I am very curious to see how it will work and how it will catch on. 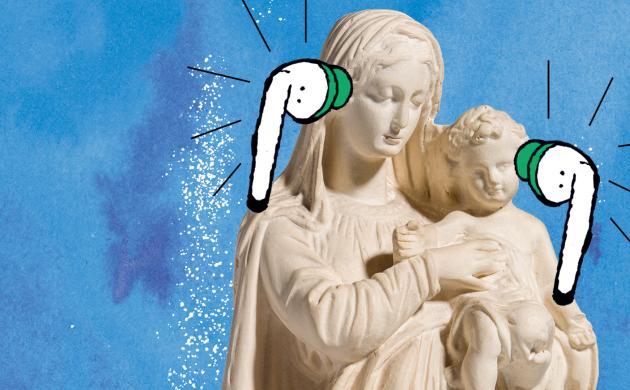