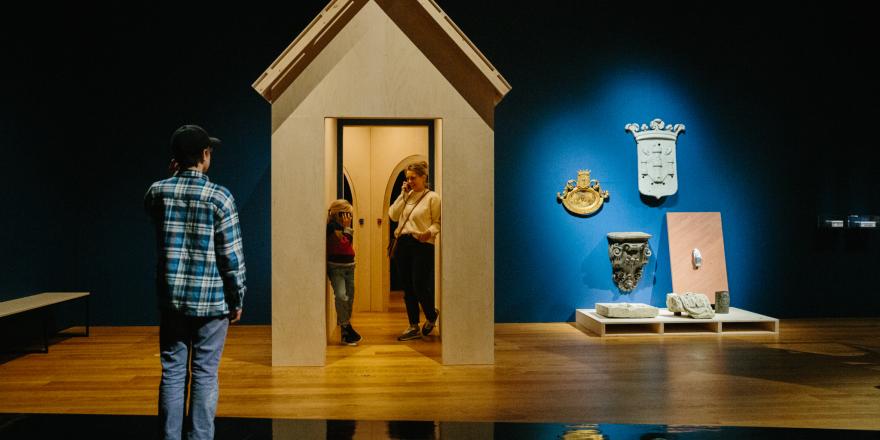 In the exhibition 'LISTEN. Stories found in the city', you can listen to twelve stories from Antwerp and around the world . Are you curious to know what they sound like? Kameleonie will give you a sneak preview here. Meet Lange Wapper, Mala Zimetbaum and Antwerp's own Romeo and Juliet.

What happens when you take something that doesn't belong to you? A poor farmer felt rich because he had a beautiful wife and a fertile piece of land. In the evening, they sat in front of the fireplace. The fire looked like gold. Wouldn't it be nice if it were real gold? The next day, he was ploughing his field and found a clay jar full of gold coins. He quickly buried them again and went home to tell his wife. "But darling, you should have taken the jar with you. You found them." But the farmer disagreed, the jug belongs to someone else. Only if they appeared in the fireplace could the coins be theirs.

The woman secretly went to the neighbour and told him everything. She asked if he could retrieve the jar during the night. She said if he did, he could keep half the coins. That night, the neighbour ventured into the field. On the exact spot where his neighbour had said it would be, he found the jar. But it was not full of gold coins but snakes. The neighbour was so furious that he dumped the jar full of snakes down the chimney. What he did not know was that halfway down the chimney those snakes turned into gold coins. They rained down in a golden stream out of the fireplace right at the feet of the farmer and his wife.

The legend of 'Mala la Belge' tells of the heroic Malka Zimetbaum, a young Jewish woman of Polish origin who migrated to Antwerp with her mother at the age of 10. Her father and brother had arrived in the city two years earlier.

In 1942, Malka was stopped and arrested on her way to Brussels. After spending time in Breendonk prison and the Assembly Camp Mechelen (a.k.a. the Dossin barracks), she was deported to the Auschwitz-Birkenau concentration camp later that year. There she became a translator and a courier between the men's camp in Auschwitz and the women's camp in Birkenau.

Malka used her privileged position to help and rescue countless fellow prisoners. Risking her own life, she passed food and messages to the prisoners. In 1944, she escaped with her lover Edward Gallinski, a Polish political prisoner who fought the Nazis. But when they were arrested near the Czechoslovak border, they were immediately returned to Auschwitz.

There they were both imprisoned, interrogated and tortured. On 15 September 1944, the Nazis executed them in front of the other prisoners. Her story is still being told today: Malka became a symbol of resistance as 'Mala la Belge'.

A tragic love story at the Cathedral of Our Lady

Willy Molkau and Maria Peeters were 18 years young, madly in love and wanted to marry. When their parents would not grant them permission, life lost its meaning for them. On Friday morning, 25 April 1913, the young lovers jumped together from the spire of the Cathedral of Our Lady.

The drama of their love rippled through the city. Hundreds of curious people flocked to the Handschoenmarkt. The vicar quickly administered the holy oil and a city officer arranged a curtain to hide the scene from the prying eyes. At the top of the tower, a guide found farewell letters from the lovers for their families and friends.

This tragic jump is said to be one reason why the tower is closed to visitors today.