The Conversion of Saul

The tile panel 'The Conversion of Saul' is one of the most important pieces of the MAS I Vleeshuis collection, the collection of applied arts and history from the city of Antwerp. The panel is internationally recognised as the most refined evidence of sixteenth century ceramics from Antwerp.

In the 16th century, Italian ceramists settled in Antwerp, making the city the cradle of majolica production in the area north of the Alps. ‘The Conversion of Saul' was made in 1547 in the renowned Den Salm studio. The work is of an exceptionally high quality. It shows how the Italian technique of ceramic painting, the bright colour palette and the Italian and French Mannerist style blend with the local tradition.

The tableau represents the key moment in the life of Saint Paul. Before his conversion to Christianity, he was known as the Roman Saul of Tarsus, who mercilessly persecuted early followers of Jesus. On his way from Jerusalem to Damascus, he suddenly receives a vision in which he is blinded by the bright lightning in which the risen Christ appears. This dramatic event brings about the change that makes him one of the most important apostles of Jesus.

‘The conversion of Saul' is considered a typical example of Antwerp majolica production and is used as a touchstone for identification. The provenance of painted tiles from national and international museums and heritage institutions could be determined on the basis of this masterpiece.

In 2016-2017 the tableau underwent a thorough restoration with the support of the Baillet Latour Fund (King Baudouin Foundation). 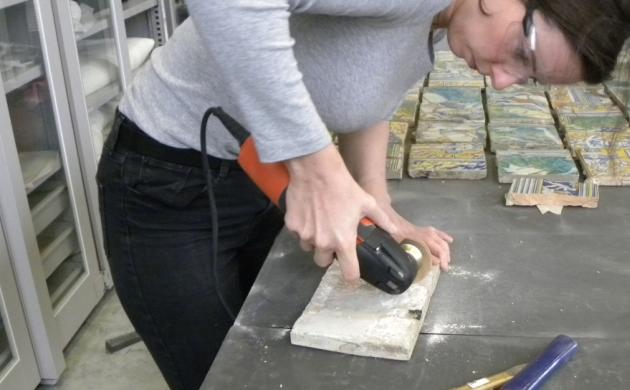 Restoration of a tile panel

The tile panel 'The Conversion of Saul' is one of the most important pieces of the MAS I Vleeshuis collection, the collection of applied arts and history from the city of Antwerp.