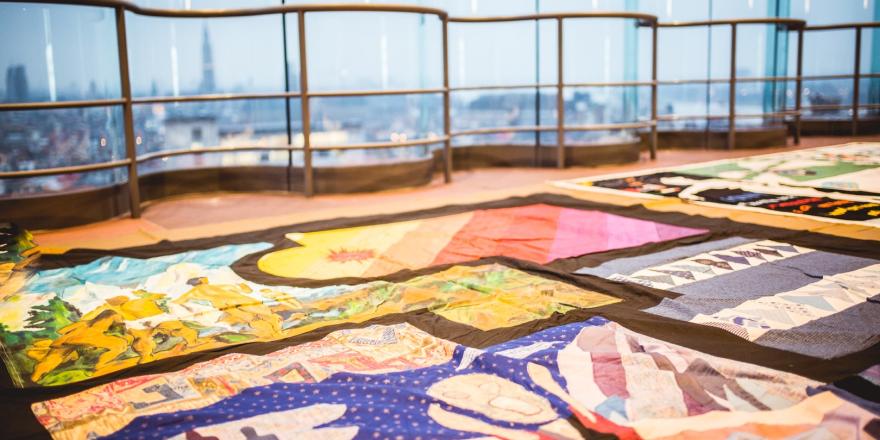 Since 1987, the quilt has played an important role in commemorating aids victims in the United States and Europe. In recent years, HIV has become less lethal in Europe and therefore fewer quilts have been created. In light of this, the Flemish association Sensoa decided to donate their quilt collection to the MAS. The quilts are unique, poignant memorial cloths for the victims of aids.

In the early 1980s, the new AIDS virus alarmed the whole world. Those who fell victim to the virus contracted HIV and became terminally ill. HIV was a big taboo.

That is why AIDS activist Cleve Jones called in San Francisco in 1985 to make the names of AIDS victims publicly visible in order to commemorate them and draw attention to the disease. This is how the aids memorial quilts were created. They are patchwork quilts made up of eight separate panels that are usually sewn together. Each quilt is a personal commemorative cloth for someone who has died of AIDS.

The first AIDS Memorial quilts in Belgium were made in 1988 through the Flemish 'Namen' project, following the example of the US project NAMES. The quilts were exhibited at AIDS memorial days and other events, both in Belgium and abroad. For each victim, a memorial canvas of about 1m by 50cm was made. The cloth thus approximated the size of a grave. Eight small cloths were then sewn together to form a large quilt. The quilts were spread according to a fixed ritual at aids memorial days and other events. In this way, attention was drawn to HIV and AIDS in public places.

Thanks to new medication, HIV stopped being a fatal disease in Belgium nearly fifteen years ago. As a result, fewer quilts are created. In 2014 the Flemish association Sensoa donated its quilts to the MAS collection.

Quilts in the MAS collection

The MAS found it logical to preserve the quilts and thus become a partner in the memory of the victims of HIV and AIDS. The paper archive of the Flemish NAMEN project is now preserved by the Suzan Daniel Fund. Every year around World Aids Day (December 1), the MAS and the non-profit organization Sensoa work together to put the quilts in the spotlight.

Other museums in Europe, meanwhile, also included AIDS quilts in their collection, the Museum for European Cultures in Berlin amongst others. The American AIDS quilts were given a permanent home in the American Folklife Center at the Library of Congress in Washington.

In addition to the quilts, Sensoa donated photographs of the quilt spread at AIDS Memorial Days and World AIDS Days in Antwerp and at international events. Patrick Reyntiens of Sensoa made an important contribution to the description of the quilts and photos. 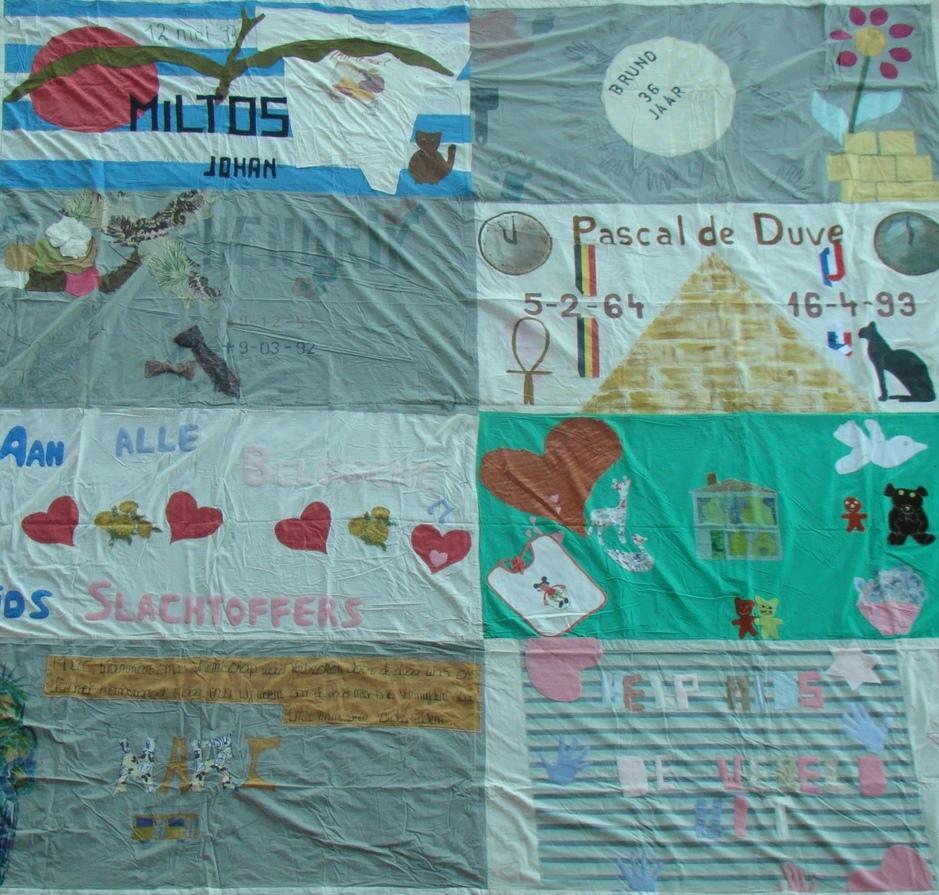 Touchingly personal and yet anonymous

The quilts are unique creations that each commemorate a different woman or man who died of AIDS. They are touchingly personal. For example, the quilt for Tony contains a small stone with his ashes. Yet the quilts are mostly anonymous, because AIDS was a big taboo, especially in the early years. It was not easy for victims and their families to make themselves known.

A number of symbols recur several times: the red AIDS solidarity ribbon and references to the nightlife, the music and gay culture of the 1980s and 1990s. The AIDS memorial quilts are not limited to the traditional quilt (patchwork) technique. Some of the memorial quilts were indeed created with patchwork, on others they were drawn or painted.

The quilts commemorate victims who lived in or frequented Antwerp. Antwerp became a meeting point for HIV victims in the 1980s and 1990s. One of the reasons is that the Institute for Tropical Diseases in Antwerp pioneered medical care. And the first Flemish organization for HIV victims arose in Antwerp.

Some of the quilts are also from Patchwork des Noms, the French-speaking Belgian counterpart to the Flemish NAMEN project.

You can take a look at all the AIDS memorial quilts in the MAS collection: https://collectie.antwerpen.be/mas/aids-memorial-quilts